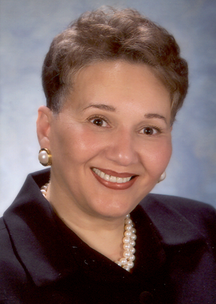 Jacquelyn Ross Brown was born and raised in Pine Bluff, Arkansas.  She was nurtured in a loving Christian

home with a deep love of family, a strong belief in education, and a dedication to community service coupled

with the commitment and responsibility of helping others.  This is the foundation which has, in turn, shaped

Jacquelyn’s academic background includes a Bachelor of Arts in Sociology from the Univ. of Arkansas at

Pine Bluff. She has also completed a Master’s degree in Educational Administration, a Master’s Degree and

Postgraduate Certificate in Educational Counseling from Canisius College, Buffalo, NY and a Master of

Jacquelyn relocated to Buffalo, New York in 1969 where she began a career as a mental health professional.  She was employed by Transitional Services, Inc. for 13 years serving as Assistant Director for two years before leaving to become the Director of the Women’s Residential Resource Center. In 1989, she joined the staff of Mid-Erie Mental Health where she was a Regional Director for four mental health clinics. In 1990, Jacquelyn joined the staff of the Buffalo Public School District as a school counselor and in 1994 became coordinator for special education services. In 1997, she was promoted to the position of supervisor for Student Personnel Services. In 1999 Jacquelyn became the Director of the Magnet Schools Office (eventually renamed Student Placement). Over a three year period Jacquelyn completely revamped the office assuming responsibility for all student placements including the Career Technical programs, all Pre-K programs,  non-self-contained special education, and placements in specialized programs such as City Honors, Olmsted Gifted and Talented, and Buffalo Academy for Visual and Performing Arts. Jacquelyn successfully led the district from a paper and pencil lottery to a computerized process.  Additionally, she over saw the district’s transition from a court ordered desegregation program to a unitary status for all student placements.


Jacquelyn’s professional affiliations included the Buffalo School Counselor Association, Buffalo Council of School Educators, and the Magnet Schools of America where she served as a board member. Throughout her work history Jacquelyn remained a viable volunteer in the community participating in such organizations as the Buffalo Chapter of the Links, Inc., Delta Sigma Theta Sorority, Inc., and Jack & Jill of America, Inc. She is also a member of Maumbasoma: Sisters Reading Book Club, a board member of Ellicott Redevelopment Foundation and a member of the Kappa Delta Pi National Honor Society. Additionally, she is a graduate of Leadership Buffalo and the Buffalo Educational Leadership Program.


Prior to retirement from the Buffalo Public School District, Jacquelyn received a calling to go forth and preach God’s word. Jacquelyn preached her initial sermon and was licensed January 31, 2010 and ordained September 19, 2010. Continuing in God’s purpose, she was called as the Associate Pastor of New Covenant United Church of Christ February 21, 2010 and as Senior Pastor November 15, 2010.


As a certified counselor and ordained minister, she is always willing to listen and make herself available to those in need. She has been a Women’s Day speaker, workshop presenter, and retreat chairperson throughout Buffalo, Niagara Falls and Pine Bluff, Arkansas. She wrote and directed a Christian play “A Step Back toward the Future” for Evangelistic Temple Community Church where she also convened A Rite of Passage “A Transformation into Christian Adulthood” for young women.  Jacquelyn served as Dean of Christian Education and established a Christian Book Club at First Shiloh Baptist Church. She also founded the Readers of Faith Book Club at New Covenant United Church of Christ.


In 1996, Jacquelyn received the Black Achievers Award for Education; she is the recipient of the Bonding Women of Faith Award from St. John Baptist Church, the Christian Sisterhood Award and Extraordinary African American Women Award from Calvary CME Church.


The widow of the late Reverend Will J. Brown, Jacquelyn is the mother of two sons: Kevin Byron Brown (Beatrice) of Atlanta, Georgia and Jason Ross Brown (Elena) of San Francisco, California. She is the very proud and doting grandmother of Raven Moon, Aminah Mulai, Willow Roxie, and Christian Noah Ross Brown.


Jacquelyn Ross Brown is a dynamic teacher and preacher who has influenced and touched many lives. The spirit of the Lord is evident in all aspects of her life and work, and for this she is truly set apart.